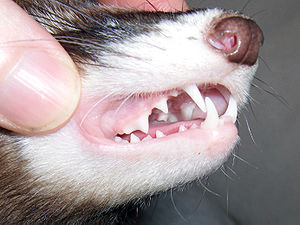 Want to know all about ferrets but don’t know where to begin? There are millions of other ferret aficionados who are stumped with the volumes of information available at their disposal about this charming furry creatures. Whether you are trying to get a pet ferret, living with someone who is crazy about ferrets or simply interested on the nuances of these musk-producing mammals, there are a few basic things that you can consider first as you get started with your ferret passions.
Biological Structure
Ferrets are like skunk’s cousins since they are also able to produce musk. Some countries allow that the glands responsible for their musk production be cut so that they will not stink as much, but countries like UK and Australia find that this is not really necessary.
They are furry creatures with natural oils that make them shiny and smooth. Frequent bathing may remove some of these oils, but they are not really the type who resists regular showers. They also have the tendency to get long nails so a consistent nail-cutting session is in order for ferret owner wannabes.
Color, Type and Age
There are many different colors available for aspiring pet owners. Breeds are quite easy especially when the ferrets are mated with pole cats like in the old times. The younger the ferret is, the more delicate they are and difficult to maintain. But then you get the privilege to train them if you are able to acquire ownership while they are still kits.
As they grow older, they seek company of other ferrets. Older ferrets, like some adults, may actually display domination or superiority to the younger ferrets. They also have the tendency to develop cliques and may not be as open to accept new ferrets in their circle easily. .
Existing Regulations
Regulations vary from place to place, so when you are caring for your ferret, make sure that you are properly acquainted with the rules. Some countries don’t allow ferrets to be domesticated as house pets, while other allow them but not so much as to take them in the airline cargo or cabin. When traveling with your pets, ensure that the airlines of your choice will be able to transport your ferret safely.
Behavior, Habits and Idiosyncrasies
By nature, ferrets are adventurous and curious creatures. You will have to set them free from their cages at dusk or dawn so that they can roam and satiate their curiosity and be happy under your care. They like dancing in a strange manner when excited and may even look like ready to attack but in reality, they are just expressing their glee.
Maintenance
Since ferrets are highly adventurous creatures, you will have to have them checked frequently. They may have the tendency to swallow objects that can be poisonous or damaging to their digestive tracts. On top of that, they may be prey to some other animals like snakes and hawks.
Some Facts on Their Rich Heritage
Ferrets haven’t been domesticated pets since time immemorial. They were adopted as pets by the Americans only in the 1980’s. Prior to this, ferrets have been used for hunting, as they are well capable of squeezing themselves in covered grounds and tiny spaces. Their talent and natural curiosity makes them really effective aids to detectives and hunters in the ancient times especially by the Romans.
Regulations came in and varied the functionalities of ferrets with human activities, which made them all the more versatile.

Natur oplevelse i norddjurs? se de bedste natur oplevelser i norddjurs. Custom signs vermont | interio.... Between different layers of painting and it will makes paint resistant as a tree root!.