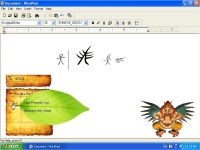 Edongba is a useful program to input Dongba hieroglyphs and Geba symbols which are Naxi’s language by English meaning or by Latian alphabet for Naxi into your edit software such as WORD on Windows 2000,Nt,2003,XP(SP2),Vista,Windows 7.
The Naxi language (a.k.a. Nakhi, Naqxi, Nasi or Moso) is a Sino-Tibetan language, though some linguists classify it as a Burmese-Lolo language. Naxi has been written with Dongba script and Geba script.
The Naxi Dongba script (a.k.a. Tomba or dto-mba) is used exclusively by the Dongba (shamans/priests) as an aid to the recitation of ritual texts during religious ceremonies and shamanistic rituals.
The Dongba priests wrote on coarse, handmade paper. Sheets were sown together at the left edge to form a book. Pages were ruled horizontally, and the hieroglyphs were drawn from left to right in three or five sections within the rules. Somewhat thicker sheets of paper form a stiff cover that contains the title. They were usually named after the type of ceremony for which they were used.
These interesting symbols depicted here are called Dongba hieroglyphs, and represent a unique form of writing, being in fact the only hieroglyphic writing system still in use today. This writing system of hieroglyphs has been recognized by international academic and cultural circles as a most remarkable world heritage. Naxi Dongba Hieroglyphs differ from Chinese characters and may be compared to Egyptian or Mayan hieroglyphs.
Naxi Dongba Hieroglyphs at first glance resemble the hieroglyphics in the Book of Death of ancient Egypt. They are, however, more sophisticated and complete because they range from a system of symbols to a complicated rebus with verbs, particles and phonetics.
The Naxi manuscripts are truly a “living fossil” that still mystifies those that study ancient Himalayan culture.