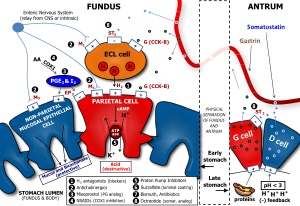 There are many factors that can be deemed responsible for acid reflux disease. One of which is the use of too much salt. Aside from alcohol, caffeine and smoking which all add to the risk of acid reflux, salt is unexpectedly concluded to cause and aggravate the disease. This finding is in accordance to the studies of researchers from Sweden. They found out from the lifestyle of their samplings that extra table salt increases the risk of having acid reflux disease up to 70%. This is alarming because it is implied that extra table salt can harm more that alcohol and caffeine. A related study conducted by Dr. Roshini Rajapaksa of New York University Medical Center attested the same results on the risks of too much table salt.

Heartburn is usually experienced after eating a heavy meal or when bending or lying down. The symptom is characterized by the burning sensation that originates from the upper abdomen and to the back of the breastbone. Then a burning sensation is felt in the chest. As time passes by, the pain travels up to the throat until you experience a sour taste in your mouth. The pain radiates all throughout the back that you become uneasy and unable to do things.

Some of the other signs of acid reflux disease are regular hoarseness especially in the morning, finding a hard time swallowing, choking sensation where the food seems to be stuck in the throat, constant dry cough with unknown cause and bad breath. These are just some of the symptoms that the person inflicted by acid reflux disease can notice on himself.

These symptoms, nevertheless, can be treated depending upon the frequency and the level of pain. Particularly, heartburn may need greater attention because it could be more than the pains it caused you. Further tests should be undergone to point out the real root and the length of damages that the heartburn had gone. Only the doctor can prescribe you the medications that will reduce an acute heartburn.

Healthy habits such as proper diet and exercise should also be developed in your everyday system so as to avoid the symptoms and totally cure the acid reflux disease. And bad habits such as smoking and drinking alcohol and caffeine beverages should also be avoided or minimized. This is the natural way of treating any disease.