The component for IBM Rational Robot and RFT to automate Pocket PC applications functional testing. It makes possible to playback tests on the PDA directly in real time mode. Testing can be run on several PDAs simultaneously via Wi-Fi, Bluetooth or USB.

This Component is designed for IBM Rational Robot & RFT to allow it to capture user interactions with Pocket PC applications running on a PDA in the form of test scripts and play back them on a target PDA. The Component allows tester to realize automatic regression testing of Pocket PC applications through captured test scenarios with automatic verification of the Pocket PC application GUI elements and controls. The tests could be performed either in fully automated way or under visual control of the tester. All operations performed at the test script run time as well as their results are logged to the test log and are available in Test Manager.

The Component provides an access to the basic operations with Pocket PC user interface elements as well as to system registry and files on a target PDA for the Robot running on a host computer. 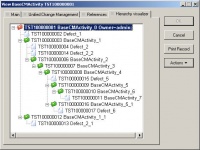